I dealt with an unusual requirement over the last few days. And wish I'd understood some of the more unusual ways that big numbers are handled in C#, Entity Framework, MS SQL and Oracle

That requirement came about in the development of an App that will act as an API for a bunch of sales data. The data is provided by another 3rd party exported from their Oracle database.

That data ultimately ends up in pretty graphs on an iPad.

When I received the first set of demo data I noticed both negative IDs and 9 digit ids.

This immediately made me worry about whether we had the right data formats (everyone worries about data formats, right?) and I asked the question.

It turns out that the DB schema that the data is ultimately sourced from has the ID column defined as NUMBER(38).

OK, that's a big number. Let's put it into context - the ESA estimates there are something like 1022 to 1024  stars in the known universe

These IDs are used in the MS SQL DB Schema that we're importing into so I can't ignore the possibility of an ID coming in with this massive value. So there're three distinct problems here…

Representing a Vigintillion in Dot Net

A quick journey to MSDN and we can see that if we restrict ourselves to integral types then we have int and long… In short one of those will hold a lot, lot less than NUMBER(38) and the other a lot less.

All is not lost. Since .Net 4 we have had access to BigInteger which allows for arbitrarily large numbers.

OK, so we can actually import the number into memory… that's a start

Using BigDecimal as an ID in EF6

Let's fire up an EF project, create an entity model with a BigInteger ID, and add a DbSet for that model to a DbContext:

How about fangling the ModelBuilder directly? 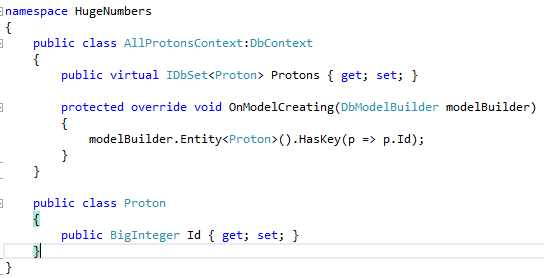 A negative result is still a result. So this is definitely progress! The scalar types in SQL include numeric which can hold 38 digits. Huzzah! And answers the question of how to represent the ID in the database.

So can we have a numeric ID in EF?!

So long as we can define a value type key we can have numeric in the DB. Ta da! 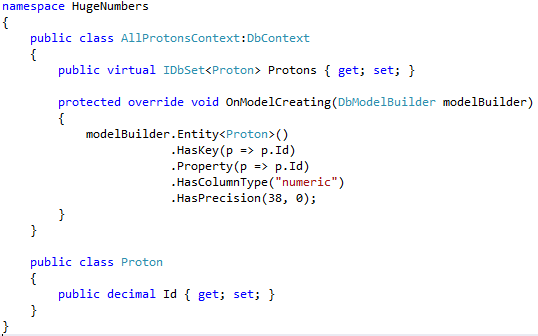 We can enable migrations and then generate one: 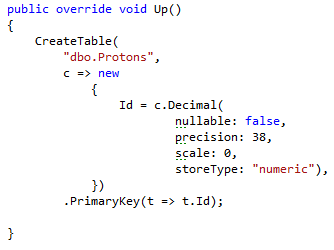 Decimal has the largest precision of the .Net value types and "only" offers 28-29 significant digits

Is this peculiar to Entity Framework?

so unless there is some funkiness possible with NHibernate (which I've never used in anger) then I'm guessing they've made a similar design decision to the EF team. And it wouldn't be possible there either…

Entity Framework is not yet ready for storing an identifier for every proton in the universe and if you might want to be storing 38 digit identifiers (a phrase which I'm assured by my five-year old daughter actually kills int32.MaxValue fairies every time it is uttered) then you aren't going to be using Entity Framework and I'd guess you aren't going to be having a good time.

And straight from the Magic Unicorns mouth

@pauldambra As you concluded, it's not possible to map BigInt with EF. Easiest solution is probably to bypass EF for that data. — Entity Framework (@efmagicunicorns) November 22, 2013