We're porting some code written by our maths wizards and there's lots of convention in their domain specific language which we were trying to capture (because we're not maths wizards and (maybe only I) get easily lost).

In one case the prospective base class wasn't a class but a struct so we couldn't do this. And we briefly discussed whether we should convert it to a class.

In that conversation I stated that structs weren't value objects. You see, I've checked in the past. After a job interview where I stated that they were value objects and wrote some tests afterwards to check… I wish I still had those tests because…

Luckily, I have colleagues whose opinions I trust and I try for my opinions to be 'strong opinions weakly held' (which might be a Greg Young-ism). So while I'm having a lazy day I wrote some tests and blew my mind!

Quoting from MSDN "A variable of a struct type directly contains the data of the struct, whereas a variable of a class type contains a reference to the data, the latter known as an object."

in the example above the line var second = first adds another reference to the memory that holds the first Object so operations on second affect first. The assignment of 100 to second.X is reflected in first.X.

Instead if we declare it as a struct (other than requiring a call through to the base parameterless constructor) the difference is that var second = first copies the data not a reference to it. As a result operations on second don't affect first so the assignment second.X = 100; is not reflected in first.X.

As an aside, it is possible to "break" this difference and this excellent article by Jon Skeet shows how.

The key fact about a value object is that its properties determine what it is, so two value objects are equal when their properties are equal. Eric Evans in Domain-driven Design: Tackling Complexity in the Heart of Software says "you don't care which '4' you have or which 'Q'".

Both of those tests pass. I'd have confidently put money on those tests failing. As above I'm certain I've written similar tests in the past and seen them fail - I should trust my memory even less than I currently do!

So a struct in C# appears to be a pretty cheap way (in terms of typing) to define a value object.

The equivalent… i.e. a class which acts as a value object.

Much more code to read than the equivalent struct! Although I used resharper's code generation to add the equality methods so actually not that much more of the typing.

The section on differences between structs and classes on MSDN is unusually clear for MS documentation and worth a read.

I've learned something and that has value. However, the team still has the problem of wanting to improve clarity. What solutions might there be.

I can think of three.

Maybe leave it as structs and use variable names and some method & class extractiion refactorings to make what is happening clearer instead of leaning on the types to do that.

This would be fine. My feeling is that the code in question leads itself to errors because it has multiple things with the same type but different semantics being used close together. It feels like it will be easier to introduce bugs as it is - but we should always be careful so this is an option.

2) Use a wrapper class

This can be a really useful way of extending a sealed object or struct.

If there was a requirement to extend the functionality of MathsName and we didn't own that object then this would be a good solution but this wrapper would be calling the wrapped method with no alterations. And MathsName has a lot of methods :(

So lots of the typing to implement but even more importantly it's possible that someone can alter MathsName without realising that they need to alter MeaningfulName too so there's the potential for bugs. It's better to help people fall into the pit of success and this solution doesn't do that.

There'd not be very much of the typing. Only the addition of the equality methods (and probably some equality tests for safety). The struct in question is relatively well covered anyway so the change would be safe.

But we create tens of thousands of these structs and pass them around. What would the impact of converting this to a class be. Class vs. Struct - the big fight ———-

I created a console application that creates a bunch of objects and structs and then calls a method on them. You can see the full program here.

What this told me was I don't really understand profiling… Doh!

When running the program to generate the structs it ran for about five seconds, preallocated around 790MB memory and kept that amount of memory in use until the end 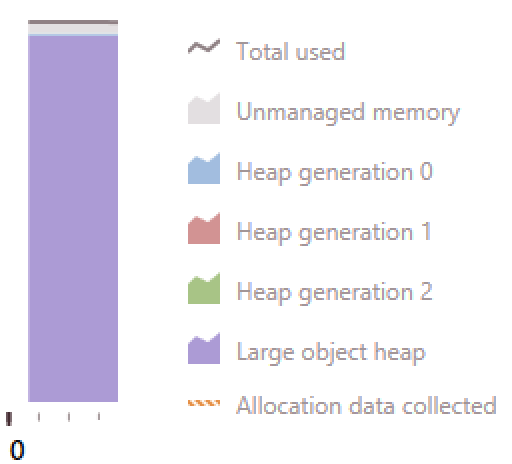 When running the program to generate objects it ran for about thirty seconds, used slightly more memory, but didn't preallocate the memory.

When running the program to generate both it ran for about thirty seconds, used slightly more memory, but didn't preallocate the memory.

What this told me was I've no idea about memory profiling… Doh!

But that there's some tradeoff to be made where if you are creating primarily structs the compiler can preallocate memory to speed things up but if you aren't then it cannot - maybe?! That needs some research…

I definitely need to learn how to profile programs.

The speed-up when dealing primarily with structs is intriguing but:

A much longer and more rambling post than anyone deserved to read!