As a name, "The Cloud™️" is terrible. It's meaningless. It totally fails to communicate what it is. Maybe it's a place you put computers? Maybe it's because applications can "scale" there?

Far better to think of "Utility Computing". United Utilities provides water as a utility to properties. Their customers know, vaguely, that there are water mains, and reservoirs, water treatment plants, and more but don't have to care. They don't think about that detail, they turn on a tap.

That's the cloud. Computing as a utility. You don't have to care if the provider is running servers or containers, if they have enough fuses in stock, or what model of switch they bought. You turn on your application and let it run.

Events are facts. They are things that happened so they are immutable. An application can store the events.

In systems that are not event driven the events are still there only they are ephemeral, implied in the API call, the change in state, the UI interaction, etc. In the event-driven system they are central to what happens.

One system registers with another. That system raises an event: PersonChangedAddress. If the "subscriber" cares it takes some action. In a system where events are notifications they might carry no information. So the subscriber still needs to call an API or in some other way load the information it needs to take an action.

One system registers with another. That system raises an event: PersonChangedAddress and includes at least the new address and the identifier for the person. The subscriber now has all the information it needs to respond to the event. 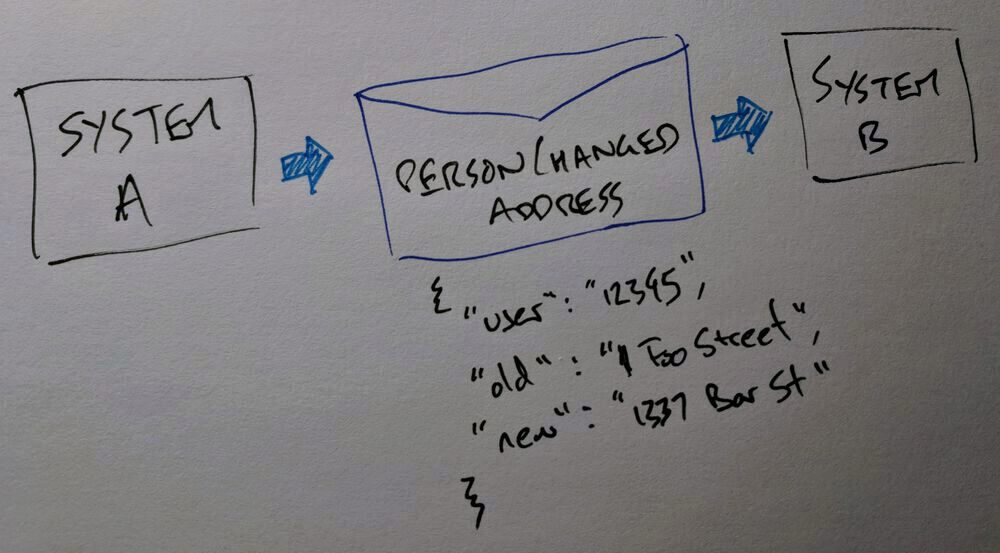 An application that separates writing to the system (commands) from reading from it (queries).

Arguably not an event-driven architecture since it can be achieved without events. But Greg Young asserts it was a necessary step to a world that has EventSourcing (in this video IIRC).

Here one application receives the command ChangeAddress. It acts on it. That action might raise an event, write to a queue, write to a database… the mechanism doesn't matter for CQRS.

Another application (or the same one in a different code path) has the responsibility for querying the system. It lets people view a list of addresses but the work of reading an address for display is much simpler (generally) than the work of accepting, validating, transforming, and storing the address on the command side.

CQRS is a big topic. Fowler's description is a good starting point. And Rob Ashton has a good article showing varying levels of complexity of CQRS approaches 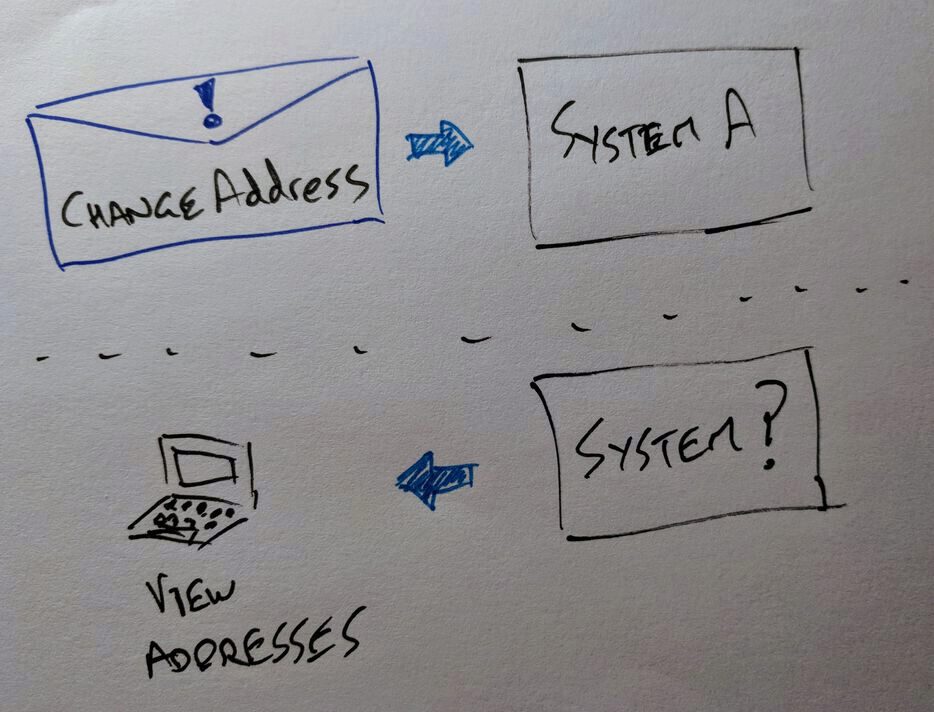 An event-sourced system doesn't only respond to events but builds its state by replaying the events. For example instead of storing an order:

You would store events:

An application can now read all three of those events to generate the state of the order.

Or it could read all of the events of type PersonChangedAddress and generate a list of all addresses in the system. 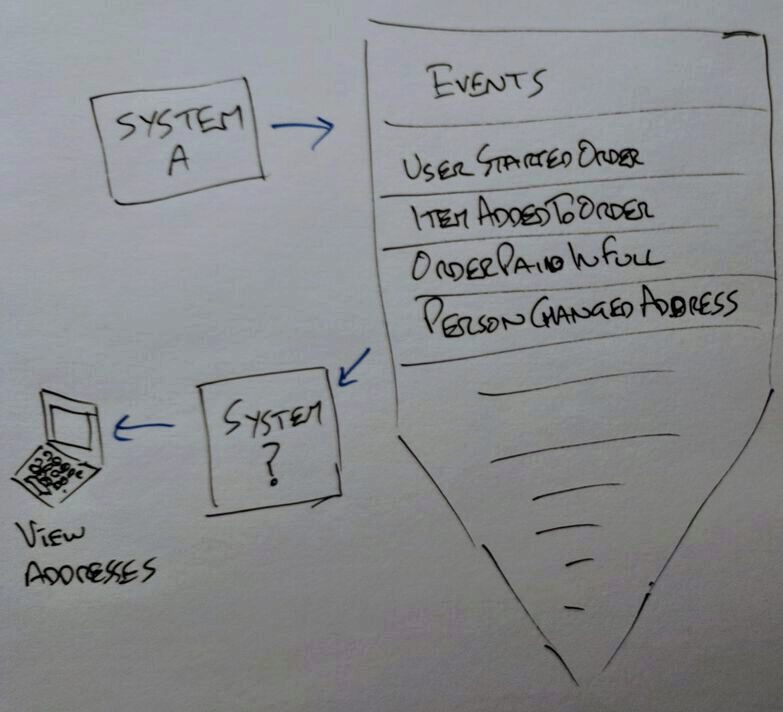 The event-driven approach has a number of benefits. Most strikingly flexibility to changes in business logic, the ability to audit what has happened, and composability. Imagine we need to report on stock and accounts changes - we don't even need to change any deployed module. 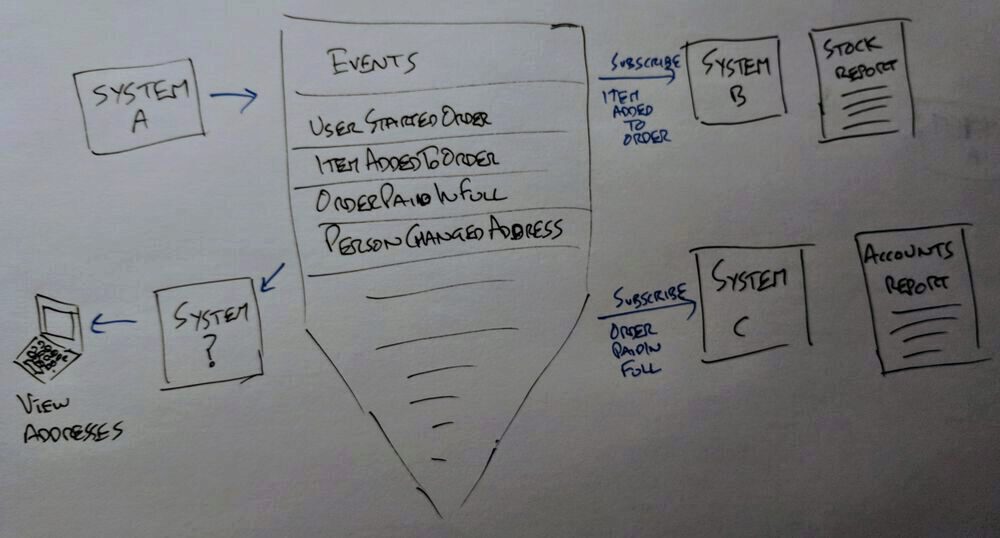 This additive approach means that every application that only reads from the stream can never add defects to existing applications!

Ok, never say never, the chance of introducing a defect at the system level exists but is far, far lower than in a change that directly affects the already deployed application's code.

Serverless continues this journey. It doesn't mean there aren't any servers. But it does mean that you hardly have to care there are servers.

Before I started this I was conflating "Serverless" with "Functions-as-a-service" (FaaS).

FaaS is a system where a utility compute provider runs arbitrary code on your behalf in response to events occuring. No virtual machine, No network config, no capacity planning. Think AWS Lambda or Azure Functions.

Storage, database, queues, and more can be provided in such a way that they are distributed, highly available, elastic, and you don't have to manage, or maintain any infrastructure. Well, ish, you have to create the serverless components and their connections… but not the infrastructure they're going to run on (and it's patches, and new versions, and foibles, and …)

So that last system diagram could be rewritten:

Globally distributed, resilient, highly available, scalable, event-driven system. And somebody else manages all the pieces while you fill it with code.

Let's use a toy system to explore it?

I love building event-driven systems but they're not the norm so it's a long time since I've had one in production. While I was off work recently I thought I'd practice. Since Serverless is the future I decided to make a serverless system. Because I know how to have fun. Finding somewhere to take your kids can be difficult and, since it was half-term, was on my mind. It seems like there are no websites that are aware of where you are, where you could go, and what the weather might be like when you get there…

So let's make that. 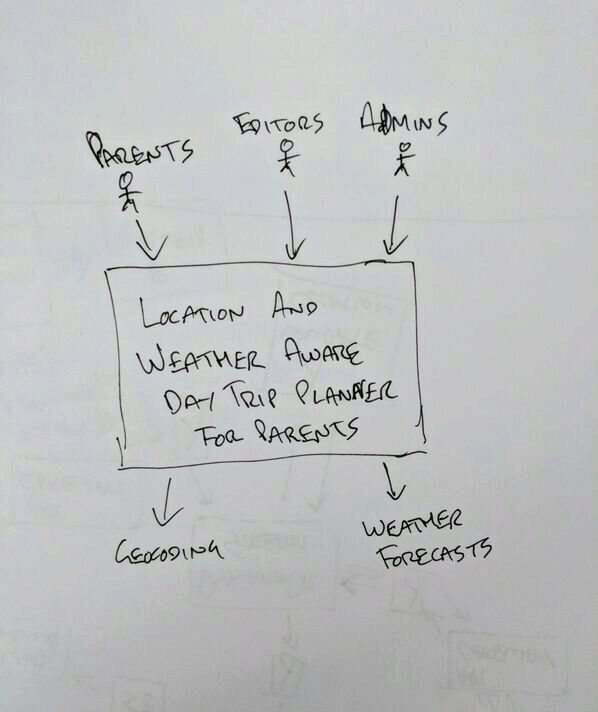 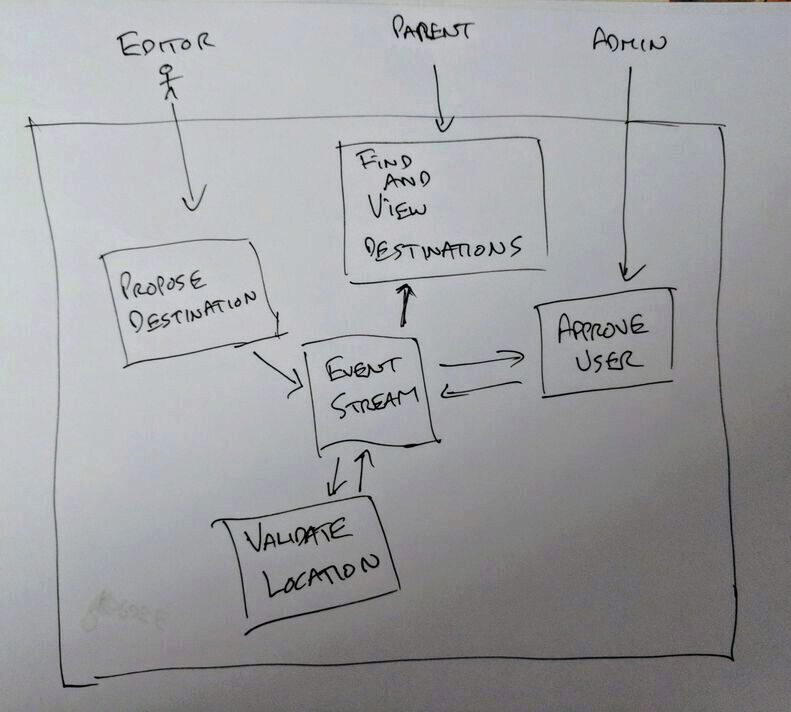 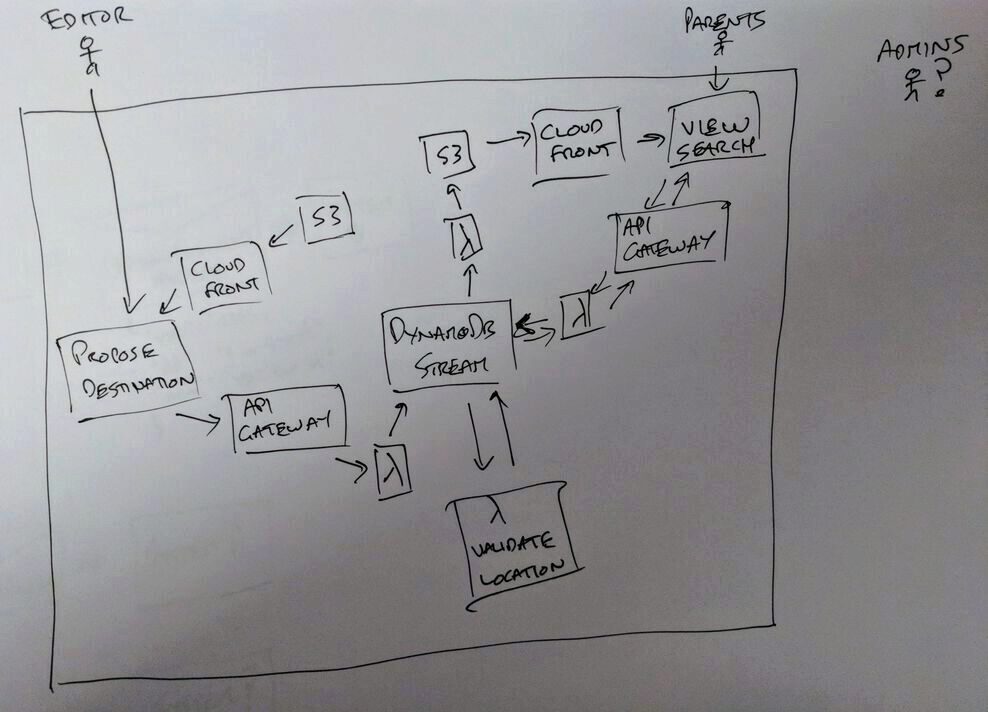 Some of this is pretty speculative but it's roughly the right shape. So it's not worth designing any more until I've learnt some more.

This is already a massive post so I'll stop here. Next time I'll try and have fewer of my terrible drawings and more code!