Disclaimer: I use and love an iPad (1). I've got an iPhone, mac mini, a MBP and an iMac. But I'm not an out and out fanboy - I'm a windows admin and nascent C# developer. I try to use Linux where it fits and find more places it fits all the time. And I've been developing an Android application.

TL;DR The transformer prime is a beautiful computer but it might be true there's an iPad market and not a tablet market.

I am fickle and this is enough to sway me to an evens opinion between the two OSs. The keyboard keeps switching back to upper case But it is chrome beta 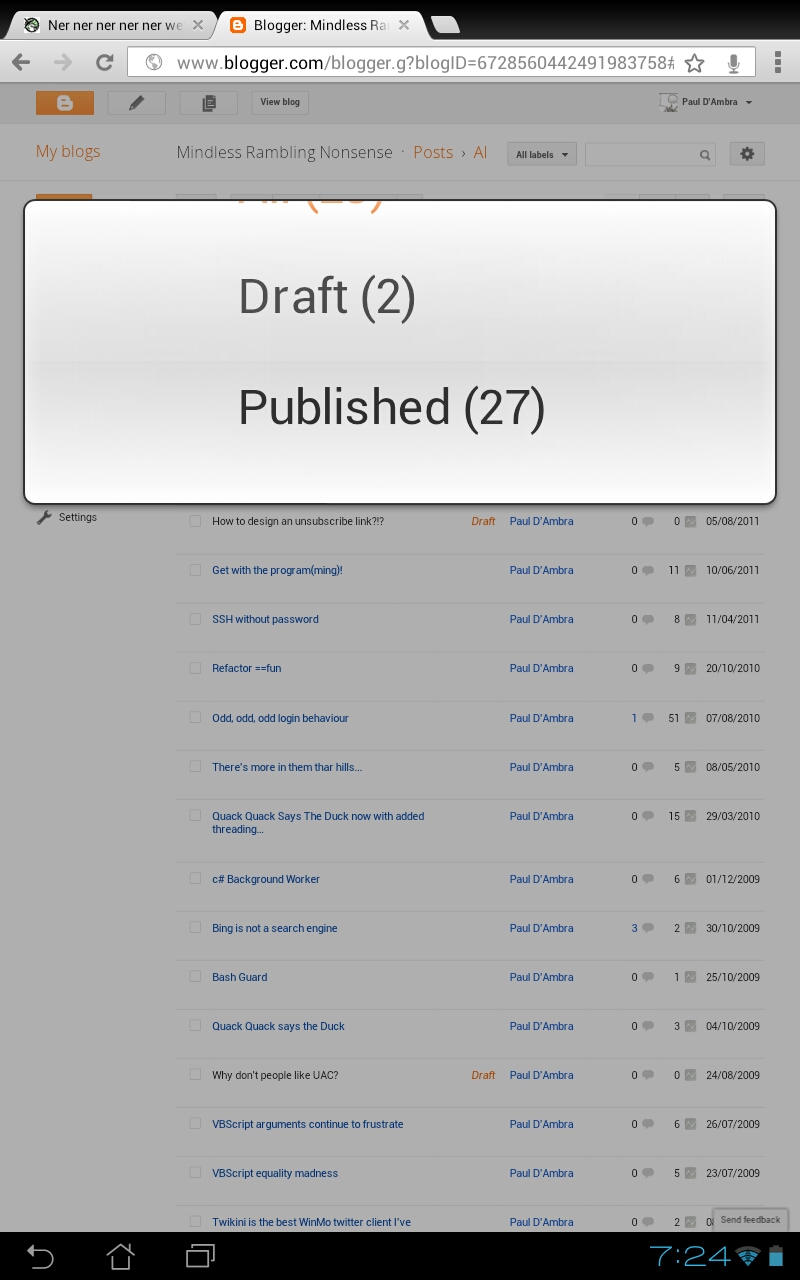 A pop-up is launched to give you a larger target. As always with Chrome impeccable attention to detail

I wanted to make a "proper", "empirical" comparison between Android and iOS. So I got a Transformer Prime.

Actually this is anecdotal and written at 5am <= YMMV

The prime is more powerful than the sum of the capabilities of all computers I was within a mile of before my twelfth birthday.

As such I ran it through a full suite of tests

A) iOS is a consumer operating system in a way that Android isn't The first time I was handed an iPad I fell in love. I immediately grokked how to use it. I bought one. My kids use it (18 months and 4 year old). They've tried but they haven't broken it. I've seen children and adults with little or no experience of computers pick iOS up super-fast. I handed the Transformer to my 18 month old and with two-screen presses she had turned off wifi. This device isn't kid proof in the way that an iPad is. My eldest when she under three taught my Dad how to use YouTube on iOS.

But a lot of this ease of use isn't specific to iOS. Touch-screen visual metaphors more closely mimic how we interact with the physical world - so a touchscreen OS doesn't need explanation in the way that a traditional desktop OS does. And neither Apple nor Google invented touch-screen gestures. Although that's not say they haven't patented them.

The first time I picked up an Android device I had to have it explained to me so I could navigate. At that point in time iOS won out with it's one big button approach.

In Honeycomb my eyes didn't immediately get that metaphor. I read it as Left, Up, Windows. Not  as; Back, Home, "Windows" i.e. multi-tasking. So I had a tiny barrier to using the system. And in the MTV-diseased, Radio-1-attention-span world a tiny usability barrier is actually a big usability barrier (you know what I mean - don't confound user's expectations)

I wanted to change application and my brain only knew how to do that in iOS mode.

But once I was over that initial hump I do like the back button. Although it can take a second to figure out where it will take you. I've found three use-cases

Using a tablet or phone you are interrupted by tweets, emails and the like and I do enjoy that in Android I can jump out of what I'm doing; check out the picture of a cat smoking a pipe and then quickly return to my previous task.

So in my scientific and empirical appraisal of ease-of-use iOS wins. The first iPad2 I bought for the organisation I work for I gave to a member of staff and said "You can have this for a week or two to try it out.". Two days later they came to work and said "Erm, I know you won't believe me but my laptop is broken can I keep the iPad?"

** IT departments want their staff constrained but enabled. **

You constrain them because you don't want them hacking away and inventing methods of doing things because that's when they delete all the files or map a share to some level of hell and release a demonic file-type that ruins your afternoon. On the flip-side constrain them too much and they will figure out the most convoluted and surprising mechanism for completing a task (almost always in Excel with VB macros) and then expect you to support the jawless hound they've created because (and here I'm stretching the metaphor): "My dogs tongue keeps getting muddy"

I'm really not sure which tablet OS (and yes there are only two players) has hit the right mix of constraining and enabling.

So guess what YMMV. Get the tablet that fits yours or your user's needs. There's not much between them - they're both usable. Why don't we all make web apps (spoiler: I don't know) If you already use and like Android and you want to buy a tablet - definitely get the transformer prime.

I'm not really sold on the clip-on keyboard but then I tend to plan my daily typing amount in advance and if I'll go over an arbitrary amount of typing I take a laptop.

The transformer is a gorgeous piece of hardware. Now to hack iOS onto it… what's that you can't do that kind of thing with iOS… Kids are awake. Blog post ends.

Bing is not a search engine