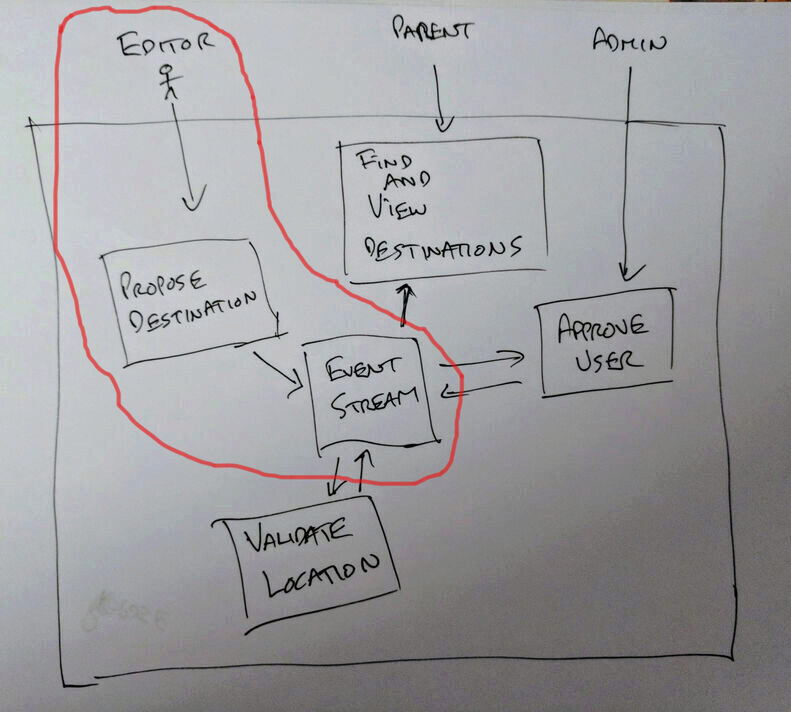 We use terraform at work so it would be quite productive to use that - but I wanted to try out SAM local to understand its local development story and deployment using CloudFormation.

From the docs: "SAM Local can be used to test functions locally, start a local API Gateway from a SAM template, validate a SAM template, and generate sample payloads for various event sources."

The Serverless Application Model or SAM is based on CloudFormation. With the aim of defining "a standard application model for serverless applications".

CloudFormation is an AWS specific infrastructure as code resource letting you author entire application stacks as JSON or YAML. That let's you launch "application stacks", in this case: API Gateway, Lambda, and DynamoDB.

AWS lambda now runs many awesome languages (NodeJS, Python, C#, Java, and Go). I 💖 JavaScript and have already experimented a few times over the last few years with NodeJS in Lambda. So will write the application in Node.

There are a number of frameworks that sit on top of AWS Lambda and API Gateway. Such as Claudia.js or Serverless. But I didn't want any of the details hidden away from me so haven't investigated them at all (which may be cutting off my arm to spite my face).

It is common to use dynamodb as the storage mechanism for Lambda. "Amazon DynamoDB is highly available, with automatic and synchronous data replication across three facilities in an AWS Region."

Which highlights one of the benefits of the serverless model - geographically distributed HA database by default.

It can read and write JSON, and allows you to subscribe to the stream of changes for a table. So most likely fits the needs of this application.

The SAM template is (once you're used to the syntax) pretty straightforward.

A header describing this template and the versions of the language used:

There are two types of primary key in dynamodb. And this is the first design decision which will need validation in future. In fact in a "real" project this would need a lightweight architecture decision record. So let's add one here.

The second kind is a composite primary key. It consists of a partition key and a sort key. The partition key no longer needs to be unique in isolation. Rather the sort key/partition key pair must be unique.

In a real system this would probably push towards StreamName as the partition key: so that events that logically live together physically live together. And EventNumber in the stream as the sort key. So that the order of items as they are stored on physical media matches the order they are likely to be read.

This would introduce a bunch of complexity in code for tracking event numbers so for now instead of an EventNumber as the sort key the decision is to introduce a UUID EventId. This will need performance testing to check that there is no significant impact of the items being sorted by UUID.

The "ProvisionedThroughput" setting show where the abstraction starts to leak and the fact that these services run on infrastructure bleeds through. Under the hood AWS is reserving capacity for dynamodb - after all they definitely do have to capacity plan their infrastructure so that we don't have to.

One write capacity unit = one write per second, for items up to 1 KB in size."

So the system needs to be sized against the expected read and write throughput.

The AWS SDK has retries built in for if the AWS service throttles your reads or writes when you are over capacity. This would be an area that would need testing and monitoring in a real system.

It's important to note that the "cost" of managing that capacity setting is probably lower than the cost of creating, managing, and maintaining your own distributed, highly-available, (potentially) multi-master database cluster.

And worth saying that on Prime Day 2017 Amazon's own use of DynamoDB peaked at nearly 13 million reads per second. So the need for throughput limits in config isn't because the service can't cope with your load.

The lambda and API gateway definition:

This sets a lambda function with a given handler, and runtime. The handler is the code that will run when the event is received. And sets an environment variable to reference the created dynamodb table.

Finally sets that this lambda function will be triggered by an API POST to /destination. Which is all SAM needs in order to create an API gateway to trigger the lambda.

With 39 lines of YAML SAM will provision an API gateway, a lambda function, and a dynamodb function. All highly available, elastic, and distributed geographically - that's pretty funky!

This is a lambda function. It's about as small a function as you can write to respond to an event from API gateway. First it logs the received event. Then it tells API gateway to return a http status 200 with the body 'OK' to the client.

After incurring the incredible cost of $0.02 because I kept forgetting to strip chai and mocha from the bundle I wrote a deployment script.

Running that creates everything necessary in AWS. Looking at the created stack there are more pieces created than needed to be specified.

This includes the IAM roles to allow these resources to talk to each other. These at least in part result from the config line: Policies: AmazonDynamoDBFullAccess applied to the lambda function.

This is much more access than we need. But in the interest of not getting diverted the necessity for finer grained access goes on the to-do list - it's possible but not necessary right now. 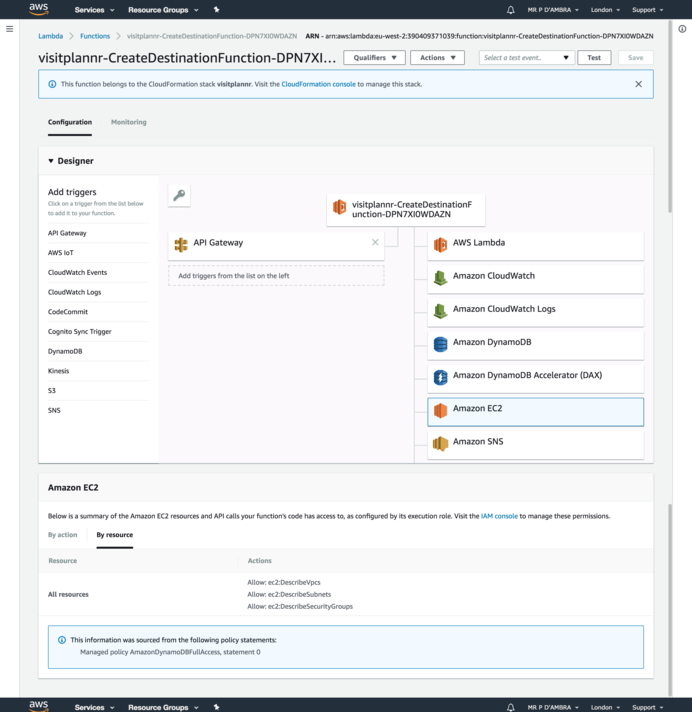 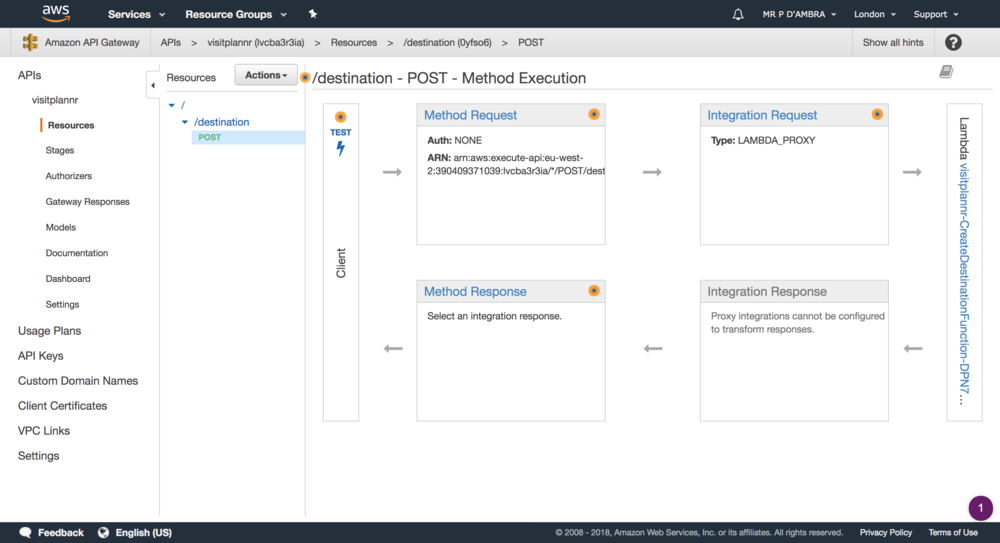 The endpoint can be tested right in the console: 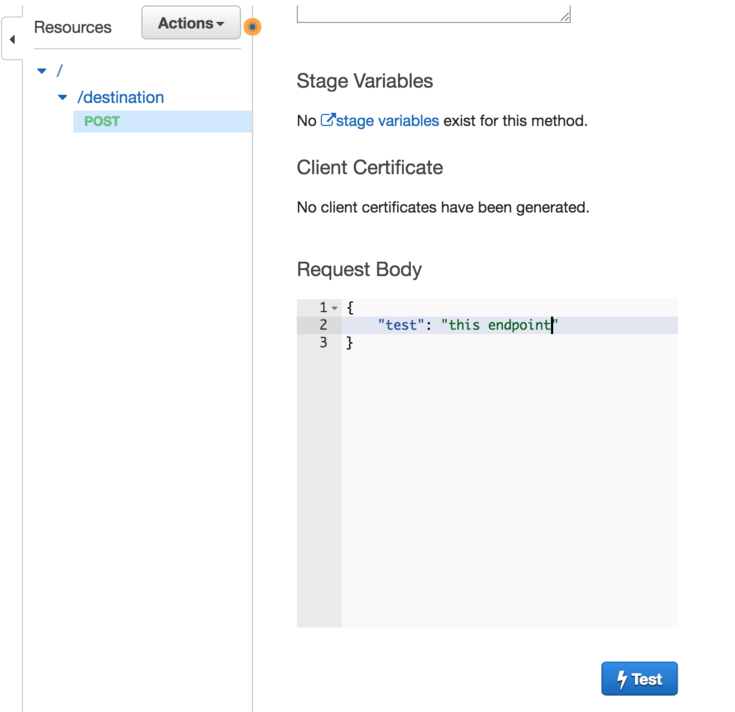 And finally, the cloudwatch logs show the output from running the lambda.

Showing you the actual and billed durations and the used memory compared to the provisioned memory.

So, it isn't that you don't have to care at all that there are servers. AWS Lambda charges per 100ms of function invocation. The amount of time you get for free and the cost per 100ms varies depending on how much RAM you allocate to the function.

In fact, increasing the RAM actually increases the underlying compute, network, threads, and more. In some experiments at Co-op Digital we saw that scaling for a network and compute bound workload was pretty important.

The table has been created and is ready to be used. The config we've used doesn't actually setup the table for autoscaling. But we'll loop back around and tidy that up later. It's another detail that doesn't need nailing right now.

With 39 lines of YAML we've created a walking skeleton to prove we can write code locally and deploy it to AWS.

We've had to learn a little about the details of dynamodb and AWS lambda where they leak their underlying infrastructure into our worlds - although presumably there's a setting equivalent to "I care less about how much I spend than how much resource you use - charge me what you like and don't bother me again". I don't want to turn that on (yet).

And we're finally ready to write some tests. In the next post we'll look at some tests, talk about the final state of the handler, and look at how to set up locally to run integration tests.

This tells AWS to delete everything since I don't want to pay money for an application stack that nobody is using and only exists for my (unashamedly very low readership) blog.